Posted on October 2, 2014 by chefkatiecooks

Even in the early days of kale’s coming out, I had trouble selling it.  In the early 2000’s, the farm for our restaurant, Sugar Snap, was cranking out kale at an epic pace.  I was putting out kale chips, kale fillings for burittos and frittatas, tons of garlic sauteed kale, red wine braised kale, and the ever popular cheesy kale bake.  Kale was (and still is) a rock star of locally-grown crops in Vermont.  I thought it was a Vermont thing.

Upon moving to North Carolina, I realized that the “Kale Kraze”  was universal, and it had hit hard.  My biggest seller at Chef Katie’s Cafe was the Kale and Sweet Potato Salad.  I was processing a case a day.  There are places where the most popular sandwiches have kale pesto as the main ingredient. Even at our local pizza joint, Marco’s, the “Kale Pizza Special” has been on the board since we moved to Asheville. I admit – it’s what I order every time – and its delicious.  Let’s face it people – you can’t take kale down, King Kale cannot be beaten.  Just face it, celebrate and embrace kale!

These Kale Tacos are gluten free, low calorie, ultra tasty, quite healthy, and easy to make.  You can use any protein you like.  I like to take chicken or turkey legs and braise them with green salsa and Mexican spices.  You can also use the Mexican chicken from my previous post, Mexican Chicken Dinner Salad.    Blanched kale is the base of the taco, taking the place of a tortilla.  I top the kale “tortilla” and braised chicken with fresh sour slaw, apple salsa, and pickled jalapeno.  The slaw and the apple salsa give the tacos a nice crunch.  Cheese is optional.

Place vinegars, 2 tbsp kosher salt, and ground cumin into a saucepan.  Bring to a simmer.

Thinly slice cabbages and add to a bowl.

Pour hot liquid over cabbage, mix well with tongs, and cover with a plate.

Place diced apples in a bowl.  Add chopped onion, cilantro, pepper, and salt.  Mix well.  Squeeze  the orange and lime into the mixture, discarding any seeds.  Mix well.  Meanwhile, bring a bot of salted water to a boil.  Prepare a bowl of ice water.  Dip the kale leaves in the boiling water, and immediately add to ice water.  Remove leaves, gently wring out extra water, separate leaves, and drain on a clean kitchen towel. 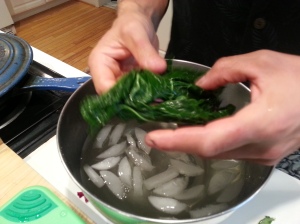 1.  Make slaw:  Place vinegars, 2 tbsp kosher salt, and cumin in a small saucepan.  Bring the mixture to a simmer.  Finely slice cabbages with a knife.  Add cabbages to a bowl and pour hot vinegar liquid over the top.  Toss the mixture well with tongs, and cover with a plate.  Set aside.

2.  Bring a pot of salted water to a boil.  Prepare a bowl of water with ice cubes.  Carefully and quickly drop the kale leaves in the boiling water, and immediately remove with tongs, and dunk into the ice water.   Wring the kale leaves out without ripping them.  Separate the leaves and drain on a clean kitchen towel.  Set aside.

I am a trained chef with almost 20 years of restaurant and catering experience. My passion is cooking clean and healthy foods. I love working as a personal chef to help people to clean up their diets, and live well by eating nourishing foods that are healthy, satisfying, and delicious!
View all posts by chefkatiecooks →
This entry was posted in Uncategorized and tagged apple salsa, healthy, kale, slaw, tacos. Bookmark the permalink.

1 Response to Kale Tacos with Sour Slaw, and Apple Salsa

~ Recommendations from an omnivorous reader.

Get some good food. Cook it. Share with friends. Have a cocktail.

stories, pictures and cooking tales from an english woman living in rome.

Living, Drinking and Eating in Burgundy

Recipes and Stories from a Canadian Cook in Ireland

Features include made from scratch, healthy, low calorie recipes for the whole family and, of course, the occasional indulgence.

I'm Kate and Finger, Fork and Knife is where I record the recipes that excite, nourish and inspire me. I focus on wholesome, high-nutrition, home-cooked food - recipes that satisfy and delight. Welcome!

Eat Out Vermont & beyond

Where a Vermont chef eats...

A fabled land of farmers, farm shares, fancy (and not so fancy) restaurants, family meals, food projects and more.